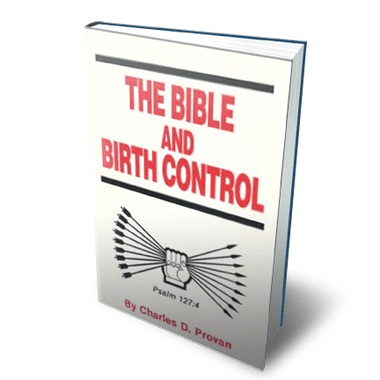 THE BIBLE AND BIRTH CONTROL

The Bible And Birth Control

A scriptural discourse on this subject.

A good source for *honest* Christians...

Provan's book makes a very good case against contraception and the contraceptive mentality. "Very good" is an understatement -- "airtight" is more fitting.

His presentation is excellent and his provision of church leaders to prove that prior to the 20th century *all* Christians new that contraception was sinful.

Unfortunately, I have a hard time getting people to read the book. They will dismiss it apriori by saying that the world "needs" contraception, or that "scripture doesn't specifically forbid it" (which is semantic dancing), or "since contraception didn't exist in biblical times, it can't have said that".

I fear for those who dismiss Provan's arguments based on the thought of the worldly. They may call themselves Christian, but they are not following God or Christ.

Another irony...Provan takes great pains to show his readers that he's no Catholic, by including several anti-Catholic quotations. Yet here he is, reinventing the wheel on an important Christian doctrine, on which the Catholic church's teaching has been consistent. If he is right in his exegesis, and the Bible forbids contraception, his next question should be "what church teaches this? Where I will find the truth?" When he finds that there is only one church that teaches this, he would know that that is the church that God established, one, holy, catholic and apostolic...

In making his case against contraception, Provan ultimately makes a case for the Catholic Church and against the Protestant Reformation. And thats a case that needs to be made, again and again, until once again the Christian church can stand unified before the world.

jcrivelli@pemnet.com This e-mail address is being protected from spambots. You need JavaScript enabled to view it
Harleysville, PA

Must Read for Believers...

Provan's book is as fresh and challenging today as when it was first written nearly two decades ago. That the work of Provan and other defenders of Christian tradition has not been in vain is seen in the most recent Open Embrace (by no means pure, however - the Torodes accept the papistic rhythm method, for instance). Provan has moreover inspired an army of Protestant writers who are now keenly aware of the inconsistency of being pro-life when it comes to abortion but pro-choice when it comes to contraception.

Provan's task is to show that both the Scriptures and the Christian tradition are on the side of openness to children. That the first denomination to capitulate on the issue was the Anglican Church (founded on divorce, the religion with more doubts than beliefs, home to Bishop Spong, etc.) and only as recently as 1930 is more grist for Provan's mill.

Provan walks the reader through a careful re-examination of the traditional "prooftexts" against contraception ("Be fruitful and multiply," "Children are an heritage from the Lord," the example of Onan) and finds modern exegesis falling woefully short of the standards set by Luther, Calvin, Chemnitz, et al. As Melanchthon argued in the Apology for the Augsburg Confession (a confessional document, incidentally, Ra McLaughlin), that God's command, "Be fruitful and multiply," applies only to Adam and Eve is akin to saying "Let the land produce vegetation" applies only to the plants in Paradise. The command holds for all who share the nature of Adam and Eve, i.e., all mankind.

And far from making the case for Roman Catholicism, Provan shows that Protestants have historically been more faithful to God's Word on the issue of openness to children than Roman Catholicism - a point which the Roman Catholic historian and jurist John Noonan concedes in his monumental study, "Contraception." Indeed, as John Noonan argues, there is not a little to the conjecture that the pope would have gone the way of Margaret Sanger back in the sixteenth century had it not been for those stalwart Reformers (Jerome had already given the Church the argument that "Be fruitful and multiply" was no longer relevant).

Every Christian should want to live in accordance with the will of Him who sent His son to die and rise for us. That His will includes a true openness to the gift of children rather than a false "stewardship" which commodifies children and views birth control as medicine (what does that make the child whose existence the medicine of contraception is used to prevent?) is a point Provan helps us recognize. In short, a must read for all conscientious Christians.

Order your copy of "The Bible And Birth Control"today. Learn what God has to say about this important subject.

Your copy is available right now for Only $7.95 (plus shipping).

This product hasn't received any reviews yet. Be the first to review this product!